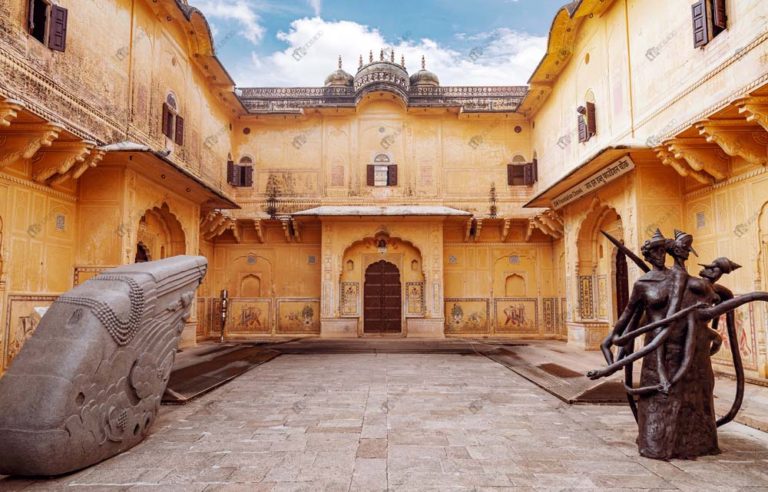 The noticeable fortification called Nahargarh Fort was built originally to protect the city of Jaipur from looters, along with Jaigarh Fort but the fort was never under any attack during its course in history. Although Nahargarh Fort was a bystander to many historical events such as the Maratha Treaty and shelter to the European nationals. The fort commissioned in 1734 by Maharaja Sawai Jai Singh II, the founder of Jaipur, encompasses a larger than life structure that would not only shield the city but augment its appeal and luxuriance. Originally named ‘Sudarshangarh Fort’, but later changed to Nahargarh meaning “Abode of Tigers” as the area was once frequented by the royal animal. Another theory surfaces that the fort was cursed by the spectre of Nahar Singh during its construction and the name “Nahargarh” was ushered upon the fort to pacify the spirit of the Rathore Prince. Also a temple was built inside the fort dedicated to prince Nahar Singh.

Hence, the aura of Nahargarh Fort is blended in Folklore and history. The interiors of this prominent fort, a perfect fusion of Rajput and European styles will render a glimpse into the times and lives of an era gone by. Located on the oldest mountain range of the world, Aravalli Hills, the fort presents a multifaceted view of the entire Jaipur city and a prime tourist destinations of Jaipur. At any time of the day, the fort is a feast for the eyes standing in its full glory but in the evenings, the fort looks like a dream shimmering with modern-day luminescence. You must plan to visit the fort after dark to get an awesome vision of Jaipur city-lights.

The fort underwent multiple renovations between 1883 to 1892 by the then Maharaja of Jaipur, Sawai Ram Singh.

#Trivia- The palace was initially constructed as a harmonious refuge for the royals, looking over Jaipur city from the ridge.

#Trivia- During the Indian Rebellion of 1857, the then ruler of the region Sawai Ram Singh provided protection to many Europeans who were accommodated in the fort.

#Trivia- Nahargarh Fort is a popular film shooting location. Some of the Bollywood films shot here include Rang De Basanti, Jodha Akbar, among others.

Exploring The Architecture of Nahargarh Fort

A timeless symbol of Indo-European architecture, Nahargarh Fort inhabits several distinguished structures. The fort is said to be over 700 feet tall. To the left of the fort, there is “Tadigate”, an entrance adjoined with a temple dedicated to the deity of the Jaipur monarchs. Beside the main temple, situated is the temple dedicated to the Rathore Prince Nahar Singh Bhomia. Inside the fortress, will appear a two-storey building, called “Madhavendra Bhawan” built by Sawai Madho Singh, housing royal suites for the king and his 12 queens, which is further divided into 9 quarters or similar apartments, with each having a lobby, bedroom, kitchen, toilets and store. The queens apartments are identical in nature and were constructed in such a manner that the king could be reticent of which queen he was visiting. The other significant structure inside the palace is “Diwan-i-aam” or the House of Commoners, an open air enclosure where the Rajput rulers interacted with their loyal subjects. The hallways of the fort are intricately frescoed deriving inspirations from both European and Rajput patters. The delicate minakari works exhibited along the corridors and connecting chambers are surely for your visual treats.

In and around Nahargarh Fort, travelers will find many vantage points to have a peek at the surrounding area, the Jaipur cityscape – opportune moments for shutterbugs to adjust their lenses and click unforgettable landscape shots. Nahargarh fort is a photographer’s paradise preferring history, scenic views and medieval architecture. Professional photographers should be equipped with night-time imaging accessories to shoot the illuminated fort and the city it stands guard.

Summary : Nahargarh Fort In A Nutshell

Share your travel stories of Nahargarh Fort and other hill forts of Rajasthan. Also if your are planning a trip to the royal land of Rajasthan, do leave us a comment!