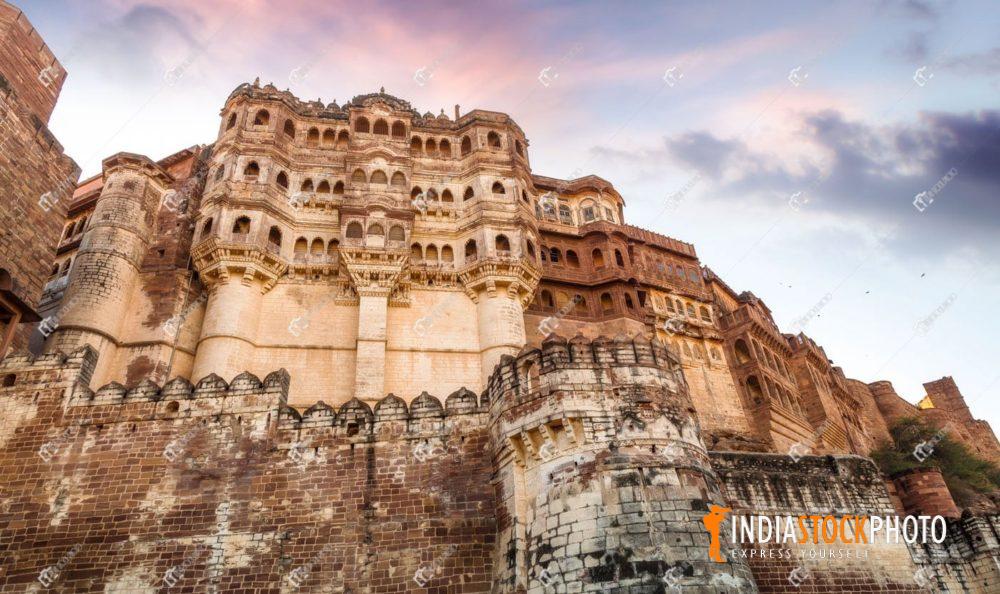 At the focal point of the desert city Jodhpur, exists the Mehrangarh fort built by Rao Jodha Rathore in the year 1459 spreading over an area of 5 KM. Set atop a rocky apex, the fort overlooks the walled city, where many buildings are painted in the shade of blue. In those periods of battles and invasions, a fort like Mehrangarh was an embodiment of vigor and pride – not only a citadel, but also an adobe for the royal families. An epicenter for nurturing art, music, literature and with many temples and shrines – the fort is also a place of reverence. The contemporary premier of the Rathore clan and custodian of the fort, Maharaja Gaj Singh II, has conserved the history of his ancestors and converted Mehrangarh Fort into a museum. Extensive displays of weaponries, paintings, elaborate royal palanquins which once transported regal beauties – preserved the legacy of the rigorous Rathores who once dominated the state of Marwar.

The Legend of Mehrangarh Fort

Rao Jodha, the chief of the Rathore clan established Jodhpur as the capital of Marwar in 1459. The new capital city called for a brand new fortress and the aspiring king Jodha came across the pinnacle of Jodhpur, a hill known as “Bhakurcheeria” or the mountain of birds and decided to carve a solemn fort out of it. With a zealous mind, the king commanded his aides to relocate the dwellers on the hill. One soul, a hermit named “Cheeria Nathji” defied the king’s orders, for he took delight in feeding and tending to birds. Persuaded, the stubborn man abandoned the hill, but accursed the monarch: “Jodha! May your citadel ever suffer a scarcity of water!” The curse terrified the Rathore supreme that his kingdom would be inflicted by repeated droughts should he erect the palace of his dreams on the hill. So he took efforts to subdue the saintly man by dedicating a temple and a residence for the saintly man. Furthermore, to ensure that the new site proved propitious, he buried a man alive beneath the foundations of the castle. The loyal man “Raja Ram Meghwal” sacrificed his mortal life voluntarily and in return was promised his family’s prosperity, till date his descendants reside in Raj Bagh, “Raja Ram Meghwal’s” Garden.

An epitome of royal glory, this crown jewel of Jodhpur city, Mehrangarh Fort is renowned for its imposing architecture. The fort is secured by colossal walls measuring 118 ft in height and 69 ft in width, and ensconce several palaces, known for their intricate carvings and broad courtyards. The fort has seven entrances, including “Jayapol” or ‘victory gate” built by Maharaja Man Singh to commemorate his victories over Jaipur and Bikaner armies. “Fattehpol”, another victory gate was built in celebration of Maharaja Ajit Singhji victory over Mughals. Visitors can spot few imprints of cannonballs fired by the Jaipur army at the “Dedh Kamgra Gate”.

The panorama of Jodhpur city from Mehrangarh Fort appears like a blue carpet laid at the foot of a hill. The architecture of the fort progressed periodically and distinctively under different rulers of Jodhpur. The conspicuous palaces within the fort are – “Moti Mahal”, “Phool Mahal”, “Sheesh Mahal”, “Zenana Dude” or the palaces of the queens, “Takht Vilas” and “Jhanki Mahal”, to name a few. The places of worship within the fort complex are – Chamundi Devi Mandir and Nagnechiaji Mandir, dedicated to Goddess Durga and the Kuldevi respectively.

The Memorial of Rajaram

To mark the great sacrifice of Rajaram Meghwal, a sandstone memorial was built over his grave at the fort site. His name, the date of burial and other pertinent facts are engraved on the burial stone to enlighten the tourists about the fateful event.

The wives of royalties would often commit “Sati” or self-immolation by hurling themselves on husband’s funeral pyre or to escape dishonor by assailants. Towards the left side of “Loha Pol” (Iron Gate), there are around 15 or so handprint murals of the consorts of one of the former kings, Maharaja Man Singh, who committed “Sati” in the year 1843.

Prior to that momentous event, 6 spouses and 58 mistresses of Maharaja Ajit Singh committed “Sati” after the king’s demise in 1731, according to folktales.

Summary : Mehrangarh Fort In A Nutshell

A portion of the sizable Mehrangarh Fort is converted into a state-of-the-art museum preserving timeless and priceless relics. Accompanied by the Mehrangarh Fort museum curator, you can set off a private tour that includes personal stories and anecdotes about the various exhibits and collections. The museum features outstanding items owned by Rathore clans for centuries, including an array of munitions from every period, swords adorned with jade, rubies and emeralds, paintings that portray the mastery of Marwar-Jodhpur artistry, elaborate royal palanquins used as transports by kings and queens, royal garments and costumes. If you are a history aficionado, this promising museum will definitely live up to your expectations.

Some of the festivals worth mentioning are the “World Sacred Spirit Festival” and “Rajasthan International Folk Festival” which are organized every year by the Mehrangarh Museum And Trust garnering lot of international attention.

Cost of Entry for Indians – INR 100 per head; INR 50 for students and senior citizens

Cost of Entry for Foreign Nationals – INR 600 per head; INR 400 for foreign students

#Trivia- One should consider audio guidance, if keen to take a deeper look into the history of the fort.

Share your travel experiences of Mehrangarh Fort or any other Hill Fort of Rajasthan. Also if you planning to visit Jodhpur, leave us a comment here!