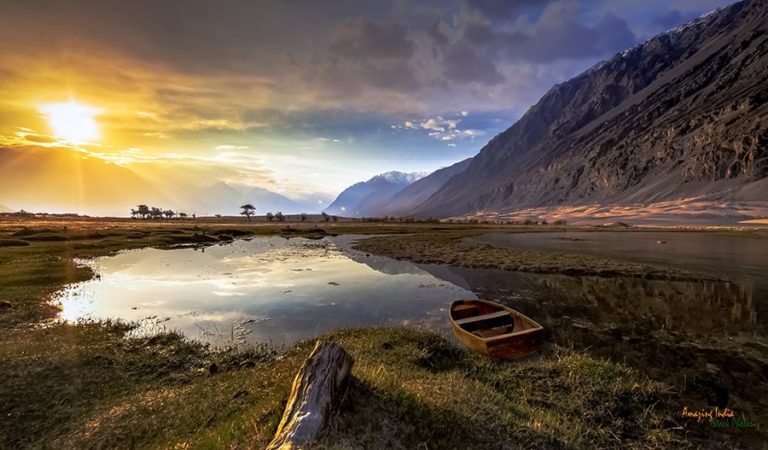 Whether you are an avid traveler, an adventure seeker or a photography fanatic just like me, a trip to Nubra valley Ladakh is sure to enthrall you with her perpetual natural beauty and topographical charm.

Nubra valley can conjure somewhere something incredible with her mystic terrains, incredible light and shadow play and skies with cloudscapes you have never witnessed before.

The entire trip to Nubra valley Ladakh in truly an adventure in itself.

The valley like most of Ladakh is a high altitude cold desert with extremely rare precipitation and scanty vegetation except for the river banks. Nubra was originally known as Ldumra meaning the valley of flowers.

The valley located at an altitude of over 10000ft above sea level is the convergent point of river Shyok with the Nubra or Siachen river forming the valley that separates the Ladakh from the Karakoram mountain
ranges.

The old silk route is known to pass through the valley. The uniqueness of Nubra lies in the coexistence of barren mountain ranges with distant snow peaks, gurgling rivers and the amazing Hunder sand dunes, all sewed into a picture perfect setup.

Trip to Nubra Valley Ladakh | Experience of a lifetime

Myself along with two of my friends teemed up with another group of seven for a trip to Ladakh in the month of October, 2018.

In this article I would be covering mainly our trip to Nubra valley Ladakh. In the following writeups I would cover other parts of Ladakh.

Our journey from Leh to Nubra via the Khardung La Pass was equally breathtaking as the place itself with zig zag mountain roads snaking through several mountains, valleys and ravines.

The road to Nubra was more of a see saw effect, initially climbing up to a height of over 18000 ft to Khardung la top and then dropping down to the valley at around 10000 ft.

The road was well paved to an altitude of 16000 ft beyond which the terrain got rough and rocky from frequent landslides enough to conjure up a nerve wracking experience.

Moreover due to high altitudes the roads were covered with snow and we could feel our car slip and drift laterally time and again.

Although scary, we felt the best option would be to focus our attention on the astounding views that unfurled in front of our eyes and leave the rest in the hands of our skilled driver and the Almighty.

Well I wouldn’t exactly know how God’s painting would look like, but as we scaled up the slope towards Khardung la top, every hairpin bends that we took and mountain ridges we crossed, presented with a scenic view that seemed like God’s carefully crafted masterpiece.

Never ever in my life have I seen mountains so colorful. Remember the childhood game “Colorman” that we used to play while in school. A kid taken on this journey could possibly point out any color spelled out to him.

By the time the trip to Nubra Valley Ladakh had reached Khardung la pass it was past mid day. It was a great relief to come out of our cars and stretch our legs specially after traversing through the hellish highway.

Everyone felt and acted like conquering heroes to be standing on supposedly known as the highest motorable road in the world.

Some got busy in group selfies and others tried to satiate their hunger with tea and “maggi” from a nearby cafeteria.

Seeing some snow around, childish exuberance gripped the tourists as they ran and walked on the ice, took photographs and even made ice balls and threw at each other.

But little did we all realize that by the time we had reached Khardung la top we had gained over 8000 feet from Leh with lesser oxygen which had started to take its toll on quite a few tourists with symptoms of nausea, breathlessness and even temporary blackout.

To make things worse it started to snow at Khardung la top.

The first sight of snowfall was greeted with a huge round of cheer and applaud but the high altitude, gusts of wind, insufficient oxygen and below freezing temperatures were difficult to sustain for long.

Although the snowing stopped within the next half hour, the damage has already been done. We had to wait in our cars for a couple of hours before the Indian army could get the roads useable again.

After nearly two hours of zoning out on the back seat of our SUV we finally resumed our journey descending down the slopes to the Nubra valley.

We finally felt a sense of relief as our trip to Nubra valley Ladakh had finally reached it’s destination and our tiresome road journey was over .

At Nubra its always advisable to spend at least a night to get the real feel and splendor of the place. For accommodations at Nubra we had a couple of options.

The first option was to stay at Diskit – the commercial hub and headquarters of the Nubra valley.

Diskit was still a modest little place and more like an overgrown village 150 km from Leh. The main attraction being the Diskit Gompa – the largest and oldest 14th century Buddhist monastery perched high above the town on the mountain slopes.

On the opposite hill stood the impressive 32 meters gigantic statue of Buddha Maitreya.

When we visited the town we noticed quite a few decent hotels there. At Nubra this is possibly the most comfortable stay that one can avail.

The second option would be to arrange for an accommodation at Hunder. Hunder is famous for its magical sand dunes and double humped bacterian camels. The Shyok river flows through this part of the valley.

Hunder village which seemed more like a premature town is located at a distance of 7-8 km from Diskit and was the erstwhile capital of the Nubra kingdom in the 17th century.

The scenic setting at Hunder was truly magical with the glistening sand dunes stretching across the horizon surrounded by high rise mountains and snow peaks along with nature’s mesmerizing light and shadow play.

Photography being our primary motive we had decided to spent the night in a camp at Nubra with decent food and comfortable tents.

Staying in a tent helped us to witness nature in it’s pristine form and splendor. The sunrise and sunsets we witnessed on our trip to Nubra valley Ladakh was a sheer display of artistry and vibrancy of colors.

The sun peeping through the vibrant moody sky striking its golden hue on dark barren mountain slopes, the towering snow peaks, the soft green meadows with intermittent water fronts- all looked so very hypnotic and magical.

For one might feel the words of E. Wilson who once said that Nature holds the key to our aesthetic, intellectual, cognitive and even spiritual satisfaction.

Trip to the Nubra valley Ladakh | Notable Findings at Nubra

Apart from Diskit and Hunder that I had already elaborated in my article the other notable places would be:

• Panamic is a rural village in the Leh district located in the Nubra tensil region at a distance of 48km from Diskit. Panamic is popular for the hot water springs which are said to have curative properties. There is a also a small indoor pool with shower area draining water from the hot springs which can give you a refreshing bath. The road beyond Panamik can lead you into the Siachen base camp – a highly protected zone.

• Sumur is another of those sleepy lesser popular villages in the Nubra valley located on the banks of the Nubra river. The village is truly picturesque with barren mountain ranges at the backdrop. Sumur is also popular for the Samstem Ling Gompa which is quite an important monastery in the Nubra valley region.

• Turtuk which was under Pakistani occupation till 1971 was opened to the public only in the year 2010. A quiet village on the banks of the Shyok river predominantly occupied by Muslim population. The village which is surrounded with apricot trees is scenic and picturesque. It is also one of the gateways to the Siachen glacier and a strong army outpost.

Almost the entire length and breadth of Nubra valley is controlled by the Indian army. Hence in case of any medical emergencies the best go to place would be the nearest army base camp.

On our trip we needed their help a couple of times and I must admit they were extremely helpful. However Diskit has a hospital although the type and facilities are unknown.

Basic Food at Nubra valley:
Once you take to the mountain slopes maggis, momos and thukpa would likely be your staple diet.

However while you are travelling of the Leh-Srinagar highway there are multiple food joints and dhabas that serve a variety of dishes.

Overall a blissful experience at Nubra valley Ladakh. Remembering the beautiful lines of the poem. “Stopping by the woods on a snowy evening” …

Let me know in the comment section below the most memorable trip you have had in your life. Which Indian destination do you wish to travel if you got a chance.

A few more photographs from the trip to Nubra Valley Ladakh

Checkout some more images of Ladakh